How do I unpair a Casambi enabled luminaire?

There are two places where you can unpair a luminaire from a network.

1. Go to ‘Luminaires’ tab and tap ‘edit’. Now you can unpair a luminaire from the delete icon ("X") on the corner of the luminaire control. You can also double-tap a luminaire control to open the "Edit luminaire" screen, and then tapping the ‘Unpair device’ button on the bottom of the screen.

2. Go to the "Nearby devices" screen found under ‘More’ tab in the Casambi app. Tap on the luminaire you want to unpair and select ‘Unpair device’. This will unpair the luminaire if you have modification rights to the network.

If you don’t have the modification rights to the network that the luminaire is paired to then you need to have access to the luminaire's power switch for the unpairing. Tap on the ‘Unpair device’ and the app will open the 'Unpair’ screen. Tap on the ‘Start’ button and the "Time bar" will appear. During the time bar, flick the power switch off and back on to unpair the luminaire. If unpairing succeeded, there is a message that luminaire has been unpaired. 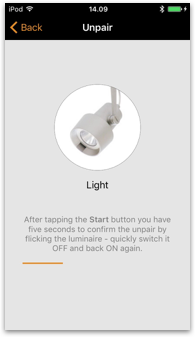