If you have created different scenes with Casambi app you can control them from a single power switch.

If the luminaire has been controlled by some other way, for example from Casambi app, then it is no longer part of the scene and it will not turn off.

Select the ‘Control Scenes’ option from Smart Switching and tap on the desired scene to select it. Confirm changes with ‘Done’. 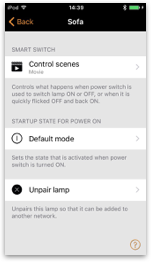 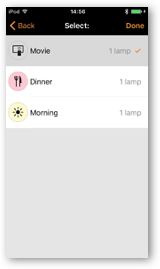