Grouping is a method of organizing luminaire icons in the Luminaires tab. Grouping can also be referred to as zoning. This can make it easier to find the correct luminaires later (especially if you have a large network). Groups can be considered as physical collections of luminaires in an area (e.g. all luminaires in a row or in one room). One luminaire can only be part of one group. You can name groups and set common dimming levels, colour or colour temperature for all luminaires in a group.

Groups are predominantly intended for manual control, whereas scenes are designed primarily for automation.

Creating and editing a group

There are two ways to create a group:

To add more luminaires into a group, select Edit and then drag and drop luminaire icons into the relevant group.

If you want to edit a group, select Edit and then the group to open it for editing. You can rename the group or remove luminaires by dragging and dropping them outside the group area. When you have finished editing the group, select Done and Close.

If you want to remove a group, select Edit or Group and then select the “X” in the corner of the group icon. This will remove the group and the luminaires will appear again as individual devices in the Luminaires tab. 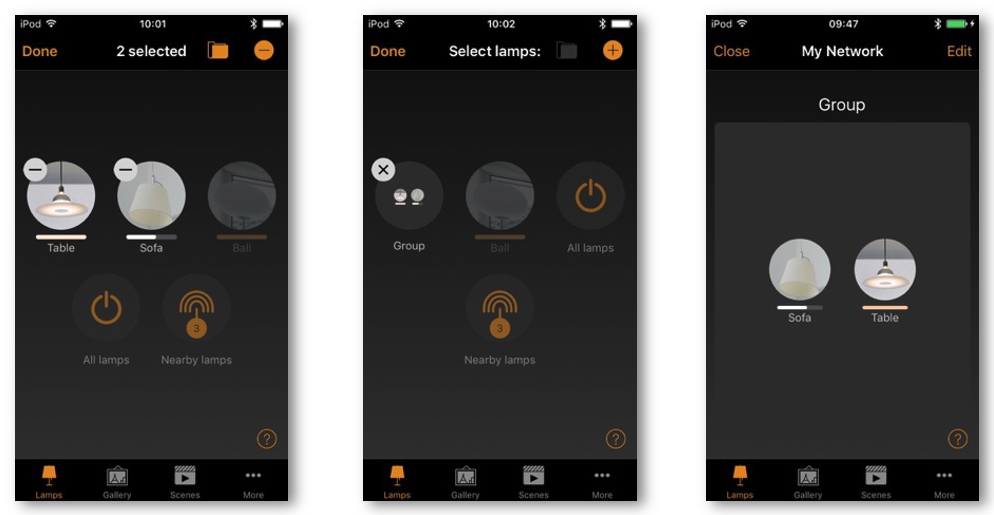