To edit individual luminaire control properties, double tap the luminaire icon you want to edit or tap Edit at the top of the screen and select the luminaire to edit. A separate window then shows the configurable properties. Note that the available options list may vary depending on the used Casambi enable device.

INFORMATION Within this section you can change the luminaire’s name and create a new icon which replaces the luminaire’s default image. The icon can be an existing picture from your device’s photo gallery, or you can take a new photo. The Details section also displays further technical information about the luminaire.

MODES Modes can be used to store different dimming levels, colours or colour temperatures that can be recalled using Switches or the Smart Switching option. To edit a mode, select and hold the Default or Mode ‘X’ (1-3) text and Edit/Cancel options will appear. Select Edit and adjust the luminaire settings as needed. The mode is automatically saved after exiting the view (tap outside the window to close it). Default can be used to set the desired luminaire start up state after a power cut. If you wish to clear a set mode, select and hold the desired Mode ‘X’ and Edit/Clear/Cancel options will appear. Select Clear to deactivate the mode. Note that the Default mode cannot be cleared.

SMART SWITCH Allows you to define functionality that occurs if the luminaires power is turned off/on. It is a method of achieving simple lighting control. Note that the smart switch option is only available on certain Casambi enabled devices. For detailed information about smart switching please see the Smart Switching section in the Appendix.

PUSH BUTTONS and ROTARY SWITCH Allows you to select the function of a luminaires inbuilt switch (if fitted), depending on the type of Casambi device which is being used. For detailed information push buttons please see the Push Buttons sections in the Appendix.

Use toggle This option is only displayed if the luminaire has a push button. It allows the button to toggle the command on and off each time the button is pressed. If disabled the push button will only activate the assigned push button function. 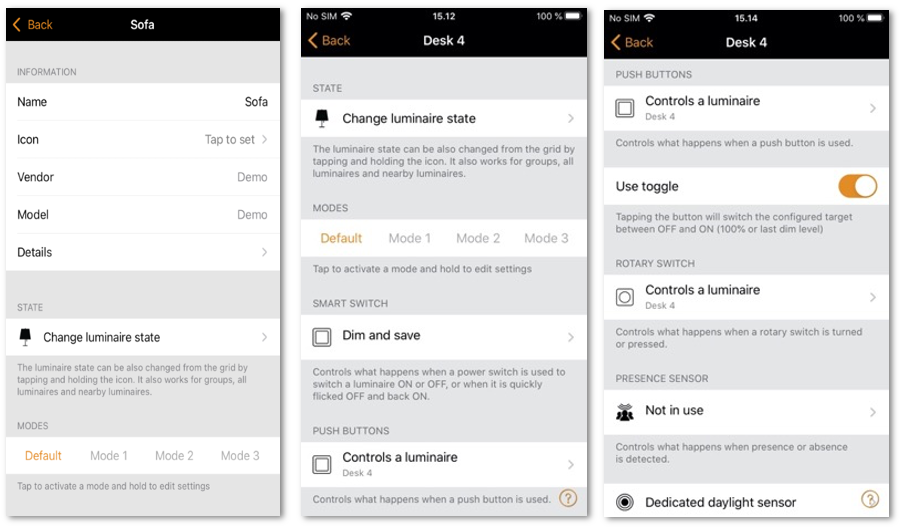 PRESENCE SENSOR Allows you to select the function of a luminaire’s inbuilt sensor (if fitted).

Daylight gain This allows you to specify how much natural light can be available in an area covered by the specific luminaire. For example, a luminaire by a window may have a daylight gain of 100%, but a luminaire in a darker area of a room may have a lower value. This feature may be used, for example, if you have just one lux sensor controlling multiple luminaires in an area but want to try to maintain a more even illumination rather than having some areas darker than others. More information can be found in the Appendix under daylight gain.

MANUAL CONTROL The Behaviour and Timeout options allow you to over-ride the network’s default manual control settings and create individual options for an individual luminaire. Select Behaviour to change how manual control should work for the luminaire and select Timeout to over-ride the default timeout value. Note that the Manual Control option will only appear if Use control hierarchy has been enabled in the Control options section of the network settings.