A CBU-DCS can be used to act as a gateway between a wired DALI network (controlled by DALI controller hardware and software) and a wireless Casambi network. Before connecting the CBU-DCS, it must first be in an un-paired state and the CBU-DCS DALI Gateway profile must be applied (see the Luminaires section for unpairing and profile changing instructions). The CBU-DCS must be connected to the same powered DALI bus as the DALI controller. Once physically connected, the CBU-DCS can be paired to the existing Casambi network.

Casambi devices which use TW, RGB or XY controls are presented to the DALI controller software as DALI or DALI DT8 (Tc/RGB/XY) devices.

All Casambi luminaires can be addressed by the DALI controller software, regardless of what type of Casambi device they are. i.e. the Casambi device does not need to be a DALI-controllable device.

As with other Casambi devices, the gateway device can be renamed and assigned its own icon.

Control Scope defines which devices are passed though the DALI gateway to the DALI control software. The default option is All luminaries. However, this can also be restricted to a single scene, in which you can define the devices which you wish to be seen by the DALI controller software.

Control priority defines the level at which the gateway will prioritise commands sent by the DALI control software:

The resume automation button (@) must be used to allow the Casambi app to regain full control if the Higher than automation or Lowest-priority automation options are used.

Export sensors Allows Casambi enabled sensors to be available as DALI-2 sensors in the DALI network.

Export light control Allows changes in the dimming level of each DALI addressed Casambi luminaire to be automatically transferred to the DALI network.

Input dimming curve defines how the dimming levels that the DALI system sends to the Casambi DALI Gateway are interpreted and sent further within the Casambi network.

Options for the Input dimming curve are:

The most suitable option to select will depend entirely on the combinations of dimming curves used in a specific set up. Unfortunately, uniform results may not be possible to achieve if the Casambi network contains luminaires having a mixture of different dimming curves.

Update actual dim level Depending on the Control priority defined in the DALI Gateway settings, dimmed levels and the actual state of tuneable white and colour controls (if DALI DT8 devices are concerned) sent by the DALI system may be overridden by Manual or Automation control actions in a Casambi network. Since use cases vary, there may or may not be the requirement for changes made in the Casambi network to be visible to the DALI system.

In all cases the DALI system must still send a command (query) requesting the latest dimmed level/colour status information (i.e. Changes in the Casambi network are not automatically transferred directly from Casambi to DALI). 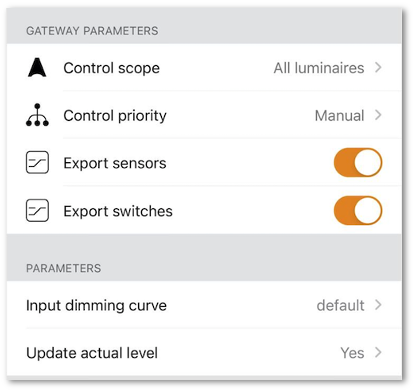 A CBU-DCS DALI Gateway enables 64 input devices to be addressed according to the DALI standard, but only 80 DALI-2 “instances” can be processed by the DALI Gateway. This means that the amount of input devices possible in your Casambi network may be limited depending on the number of instances the devices use.

When planning DALI Gateway use in a Casambi network containing input devices, a calculation of the number of input device instances is necessary to ensure communication through the DALI Gateway works as desired. If you exceed the 80-instance limit, input devices will still be addressable (up to 64 devices) but some instances will not be recognized.