The Control options page allows you to define the basic and automation controls (Control Hierarchy) of a Casambi network.

Remember last state Activating this option will allow luminaires to return to their previous state when toggled on from the app or a Casambi enabled switch. Note that this is not the same as a luminaire’s STARTUP STATE FOR POWER ON, which is the startup condition when a luminaire is powered on.

Activate timers on startup When a luminaire is powered on and has received the network time, any timers associated with it will then activate.

When the Control hierarchy is activated, a number of options will then become available and a @ button will appear in the lower left of the Luminaires tab screen to allow the end-user to manually resume network automation if needed.

The Control hierarchy options are:

Manual control behaviour This option selects how luminaires should react to manual control and if/when network automation should resume. 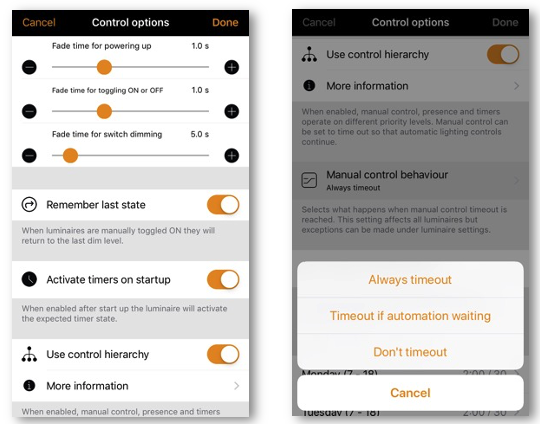 Manual control fade out This option sets the time within which a luminaire will fade once manual control has expired.

Manual control timeout The timeout value is the length of time a luminaire can remain under manually control before network automation resumes.

A separate timeout value can be set for each individual weekday, its evening and night. The default values are 2 hours in the day and 30 minutes in the evening, but these can be changed to suit your installation.

The Use these settings for the whole week option allows you to set the same day and night values for the entire week, rather than have to manually edit the values for each weekday. 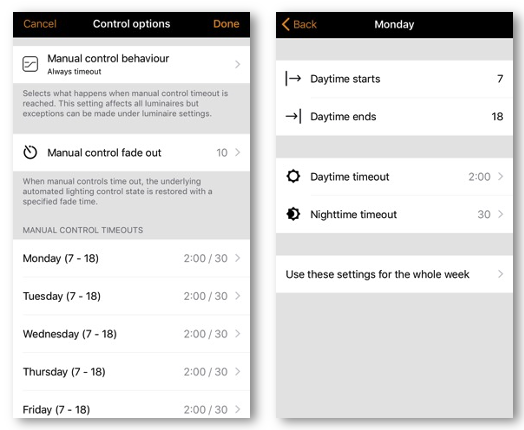