In most circumstances, calibrating a daylight sensor will not be needed as the sensor technology is highly likely to be accurate enough. However, if calibration is needed, then it first needs to be determined whether the sensor should be calibrated for measuring incidental or reflected light.

Site specific variations due to differences sensor specifications, locations, orientation and the available natural and artificial lighting in an area, mean that calibrating a Casambi enabled sensor ensures the lux value measured by the sensor is interpreted by the Casambi system into a corrected lux value for the application.

Incidental light is the total amount of light being received by the senor. i.e. the light that falls on the surface of the sensor lens that is gathered from the entire area in which the sensor is situated.

This is the default measurement and is the lux reading that a sensor will display in the Casambi app.

Usually this will not require recalibration. However, sensor limitations may mean that it is not capable to measure the full lux range to which it is being subjected. This may occur for example if a sensor is mounted in direct sunlight.

If needed, the below steps should be followed to calibrate the sensor reading in the Casambi app.

When using the sensor in any of the daylight scene modes (Mode of operation) that are configurable in the Casambi app, the lux value used for any adjustments will be the corrected value of lux actually being received at the sensor itself. Thus, if the sensor is calibrated for direct light, using Closed loop mode for constant light control will try to maintain an overall total amount of light for the whole area in which the sensor is situated.

Calibrating a sensor for reflected light

Reflective light is light that is being received on the surface of an object, or objects placed directly opposite the lens of the Casambi enabled sensor. For example, the amount of light falling on the surface of a desk in an office.

If you would like to try to maintain a specific amount of light on that object or surface you will need to calibrate the sensor lux value shown in the Casambi app. It should also be noted that when using a Casambi-enabled sensor in this way, the accuracy of the lux measurement will be reduced because the accuracy will be reduced the further the measured point is from the surface of the sensor lens.

To calibrate for this type of use:

If you now are using the Closed loop daylight mode in a scene, the Casambi enabled sensor will attempt to maintain a constant amount of light on the surface of the object, for example the surface of a desk that is directly below the sensor.

When calibrating a sensor that is to control the amount of artificial light in an area, it is important to remember to exclude as much natural light from the area as possible during the calibration. Ideally there should be no natural light. Also, it is best practice to try to have the installation in as final state as possible with all carpets, decks and other items in their final places. This enables the most accurate calibration and the best dimming range for the controlled luminaires in the widest possible variety of situations.

Regardless of the calibration method chosen, it is necessary to consider if one or multiple sensors distributed through an area would be required to archive the best possible lighting control solution. Each individual sensor may need calibration for the lighting conditions applicable in their specific area of installation.

Note also that if multiple daylight sensors are configured to be controlling the same luminaires in an area then the lux values used by the Casambi app will be the average of all sensor measured lux values.

Within the Daylight sensor settings, you will see options for adjusting the sensor Sensitivity and Tolerance.

The Sensitivity defines how quickly the sensor will react to changes in illumination. The higher the sensitivity the faster the reaction time. Lower sensitivities are usually chosen to avoid possibly annoying situations of luminaires dimming up and down every time a cloud happens to cover the sun for a few seconds.

The Tolerance defines how large the changes in measured lux value need to be before the sensor will react and make adjustments to the lighting. A larger value requires larger measured lux changes.

A consideration when configuring daylight control of an area is whether luminaires may need to be configured with a daylight gain offset in order to optimise the achieved dimming conditions. Daylight gain is mainly used, for example, if there are multiple luminaires in an area being controlled from a single daylight sensor.

Configuring different daylight gains for the luminaires in an area would have the effect of providing a more consistent illumination throughout a room if controlled by a single lux sensor. Luminaires installed near a window will dim to a lower level than luminaires situated further inside the room, but users of the area will perceive that there is a similar amount of total light available throughout all areas across the entire room.

A recommended method to determine the estimate of daylight gain for different areas would be to use a lux meter to take readings at different points without any artificial illumination being active (i.e. only natural light is available). The highest lux reading can then be taken to be 100% daylight gain and lower daylight gain percentage values can then be calculated. 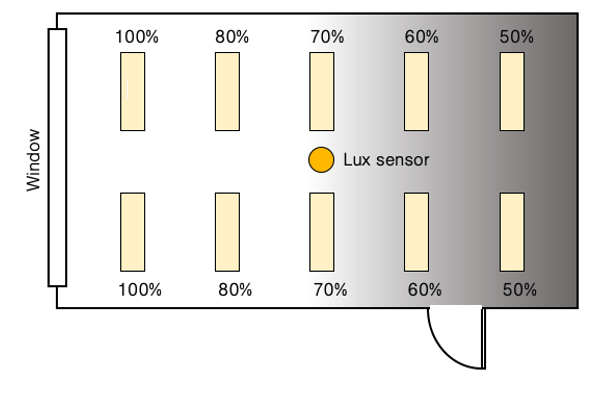 Each luminaire in a Casambi network can have its own daylight gain defined if desired. As standard the Daylight gain for luminaires is set to 100%.

If a luminaire has an inbuilt daylight sensor, you may wish that luminaire to only respond to values from that sensor. Alternatively, you may have a situation where you are using multiple daylight sensors, but you only wish to have one specific sensor affecting a particular luminaire. In such cases you can configure individual luminaires to react only to a specific sensor.

From the Luminaires tab select Edit and then select the luminaire you wish to configure. Scroll to Dedicated daylight sensor, tap and choose the correct controlling sensor from the displayed list. Push Done, then Back then Done again to return to the Luminaires tab view.

To achieve the best performance from a daylight harvesting installation it is important for the location of the lux sensors to be carefully considered. The performance of the lighting control will depend totally on what the sensors “see”. This is particularly important where you have lighting applications relying on side-lighting, reflected light, diffused daylight or where direct sunlight can influence the sensor performance. It may be that simply a small change in sensor location or orientation can affect the overall system performance.

The lux sensor should be placed so that it receives a representative sample of the available daylight in an area. Having a too wide field of view can result in detection direct sunlight or illumination from light sources outside of the zone being controlled. A too narrow field of view can have the effect of making the sensor too sensitive to local changes in brightness.

Prior to sensor placement, it is good practice for a separate lux meter to be used to measure light levels at potential locations before choosing the final daylight sensor positions.

A sensor that is to be used in Closed loop mode (i.e. Intended for maintaining a constant illumination level in an area or on a surface) is usually mounted on the ceiling to enable it to view a representative area that includes the illuminated area it is controlling. It should not be placed with direct view of a window or, for example, a pendant luminaire.

In an ideal situation, closed loop systems should be configured when there is an absence of all light that is not being controlled by the sensor (i.e. at night without any daylight, and without any other lighting being active that is not being controlled by the sensor). In addition, the installation should be in as finished state as possible, for example with all desks, carpet and equipment installed. This is because each item placed in the sensor measurement area at a later stage will change the amount of reflected light received by the sensor and will also therefore have an effect on the constant light performance.

Open loop sensors are typically ceiling mounted and orientated towards a window or skylight to view incoming daylight but not any of the illuminated area that is to be controlled. Alternatively, open loop sensors can be mounted totally remotely from the illuminated area, such as outdoors. Open loop systems are easier to configure since they just require a dimming response graph to be defined which will tell the Casambi system what dimming level to target for a measured lux value. Due to this the configuration can be done at any time of day.

Regardless the chosen sensor or intended mode of operation, the sensor manufacturer’s specifications, and installation and placement instructions should be followed.